While testing the new TMP 50 (S/N31001349549) on the HV setup, it failed three times. All three times, the TMP was started at a pressure of 4E-3 Torr or below and failed about 4 minutes into the acceleration at pressures of 6E-5 Torr or below. Before the last attempt, we ran the roughing pump with the gas ballast valve open for 20 minutes. According to the Turbotronik NT 10 manual (version 17200334_002_A1) troubleshooting guide, the possible causes are:

The maximum ambient temperature of the TMP 50 is 55 deg C. The room temperature is about 24 deg C. The cable was attached securely and seemed to working just fine with the refurbished pump. We read the manual carefully and found that there is a “resonance monitoring” switch that is in shipped in the ON position. It is done so to protect the model TMP 50D turbopumps.

The manual says that if the rotors are spinning between 40k to 50k rpm for more than a minute, then the pump shuts off and results in a FAIL. The TMP 50, according to the manual, does not need this protection and can be switched off if necessary. I opened up the controller, after unplugging it and turning it off, and toggled the switch. The TMP 50 started up just fine and reached normal. It has been okay and holding steady for the last 30 miniutes. It may be that this has been the problem for all of our other pumps as well.

NOTE: The “resoance monitor” switch is ON by default.

NOTE: The “xxx_A1” manual for the NT10 controller has a diagram that indicates how to toggle the switch, while the “xxx_A2” manual does not.

Below are pictures of the PCBs inside the NT10, where the switch has to be toggled by moving a jumper from S5 to S6. 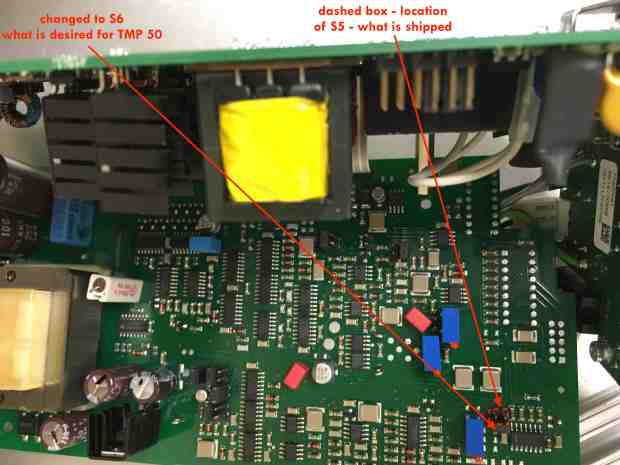 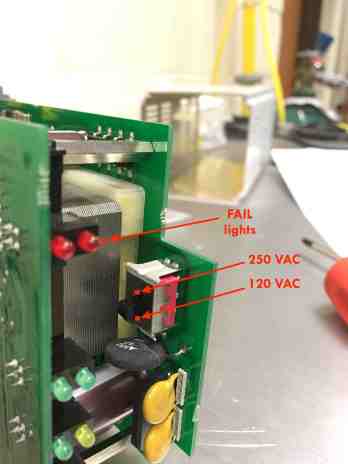